Black cats are typically not adopted as often as other kitties, but, thanks to the popularity of Marvel superhero movie “Black Panther,” everyone seems to want their own mini panther at home.

A post about this “unexpected benefit” of the movie on Tumblr went viral, as did @kaludiasays’ tweet about it.

Unexpected Benefit of Black Panther: my local pet shelters went from having something like 50-60 black cats between them to having NONE, because they’ve all been adopted out and named after the characters. “T’challa” is the most popular, but there are a fair number of “Okoye”s and “Shuri”s as well.

…and one very confused Elderly Humane Society Volunteer wondering why someone would name such a sweet cat “Killmonger”.

For everyone concerned that this preference for black cats will fade when the movie leaves theaters, the viral post was followed up with details about due diligence on the part of the Durango, Colorado shelter. Reports gallusrostromegalus:

These cats are mostly being adopted to people who were looking to adopt *A* cat in general, then see the black kitties and go “LIKE BLACK PANTHER” and take them home, so for once, black cats are being adopted first.

Cat adoptions are up in general, so that’s also great!

And if you already have your own petite panther at home, why not outfit him like the royalty he (or she) is? (Photo via @Catsu) 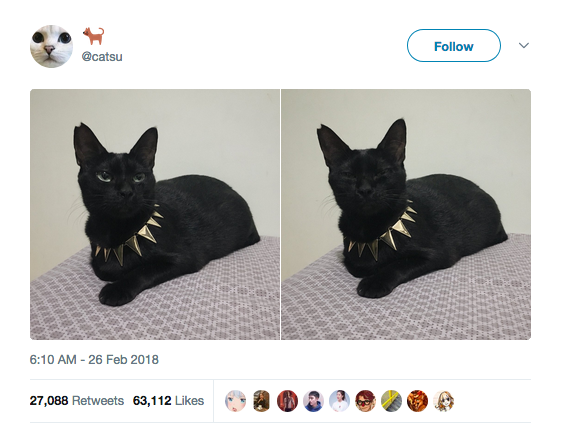 And yes, we know, there really is no such thing as a “black panther.” To quote Wikipedia:  “Black panther is the melanistic color variant of any big cat species. Black panthers in Asia and Africa are leopards (Panthera pardus), and those in the Americas are black jaguars (Panthera onca).”