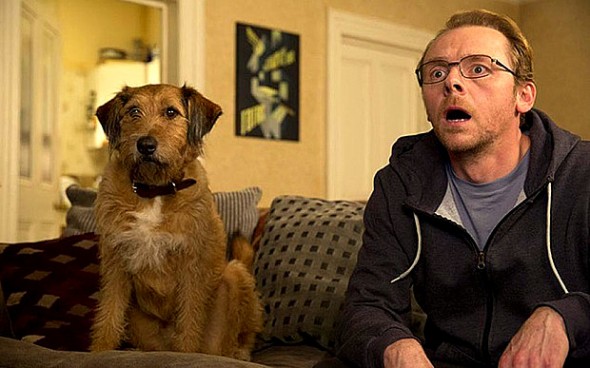 In his final film, comedian Robin Williams plays a talking dog who helps owner Simon Pegg save the world from aliens in Absolutely Anything.

As director Terry Jones told Empire Online, “I think he’s going to steal the show. Before Douglas Adams (author of The Hitchhiker’s Guide to the Galaxy) died, he looked over the script and he said that Dennis the Dog’s scenes were the funniest scenes.”

As Jones explained to Variety, fellow Monty Python members John Cleese, Terry Gilliam, Michael Palin and Eric Idle are the voices of the aliens: “John does the chief alien;  Terry does the nasty alien who’s very small; Michael is the nice one and Eric is the wisecracker.”

Jones recalled how Williams got on board: “I came to LA to receive an award. Robin Williams was sitting in the front row and I asked him, would you play Dennis the Dog? I’d met him before a couple of times at Terry Gilliam’s dinners. I sent him the script and he said, ‘Let’s get this baby made!’”

Co-writer Gavin Scott told Variety how dedicated Williams was to the film: “He was rock solid for us and so talented, so that makes his passing all the sadder,” he added.

Also starring in the film are Kate Beckinsale, Eddie Izzard, Rob Riggle, and Joanna Lumley.  Absolutely Anything opens in the UK on August 14. No U.S. dates have been announced yet.