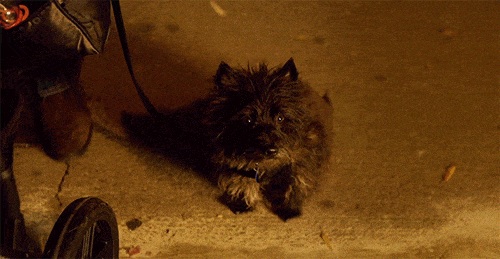 One of the best moments in the pilot episode of the new USA drama “Mr. Robot was when hero hacker Elliot (Rami Malek) blackmailed his psychiatrist’s married jerk of a boyfriend to break up with her — and then insisted that the guy also hand over the dog he clearly was also mistreating.

Of course, Elliot isn’t a much better dog father so far, not realizing you have to actually walk dogs if you expect them not to go inside.

“So there are times when I’m filming when I’m like, ‘Dusty! Dusty!’ to get her to do what I need her to do,” Malek says. He says he ad-libbed a line where he’s encouraging her to do her business.”There’s a moment [in the pilot] when I’m trying to pump myself up in the server farm, and I say, ‘You got this! You got this! You got this!’ So I ad-libbed this line to Flipper. I get down and I’m like, ‘You got this.’ It’s really good,” he says, laughing. “[Mr. Robot creator Sam Esmail] dug it, and he doesn’t always like me — or ever like me — ad-libbing dialogue.”

He also revealed that Qwerty was originally a cat. No problem, except that Malek is allergic. “So Qwerty became a dog,” Malek says. “We shot with this big fluffy white dog that you saw in the production stills. I walked in, and I said to Sam, ‘You got the sitcom dog. That’s the dog that’s in every family home on every sitcom. That is not my dog.’ As soon as you say the word ‘sitcom’ to Sam, he’s like, ‘Kill it.’ He didn’t kill the dog,” Malek clarifies with another laugh. “So then, Qwerty became a fish. But Flipper was always Flipper.”

We’re just hoping no one kills Flipper and that Elliot eventually gets the hang of having a dog.