Bad news if you were planning on seeing DisneyNature’s “Dolphins” for Earth Day: The film has been pulled at the last minute.

Disney has not explained why the film, which was set to be released today, April 22, won’t be released as planned.

Film Center shared this official response from Disney on Twitter:  “Disney Nature’s ‘Dolphins’ scrapped, next release scheduled to be ‘Penguins’ for Earth Day, 2019”

As noted in Disney’s official response, the next DisneyNature film will be “Penguins,” which will be out on Earth Day 2019.

According to a Dutch Twitter account, “Dolphins” has been renamed “Blue” and is now playing in Europe. It’s not clear when (or if) it will be released in the U.S.

Also not opening in theaters as scheduled today (per Lights Camera Jackson on Twitter): The animated film “Duck Duck Goose.” 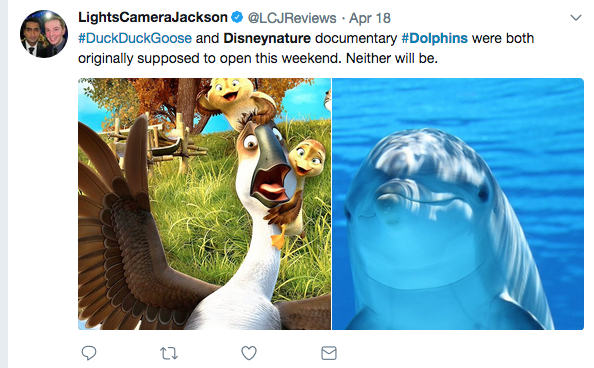 You can still celebrate Earth Day by watching the following films:

1. “Pandas” — Kristen Bell narrates this documentary about Chinese scientists who are breeding Giant Pandas and trying to introduce cubs into the wild. (Now playing at select IMAX theaters)

2. “Love and Bananas: An Elephant Story” — A documentary about the rescue of a blind Asian elephant in Thailand. (Now playing in limited release: Find screenings near you)

2 thoughts on “Disney Pulls ‘Dolphins’ From Release: What Else to Watch on Earth Day”