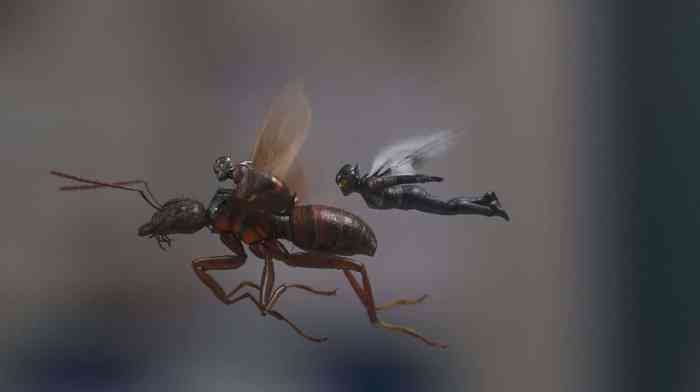 Does the super-sized ant (aka the “messed-up looking dog”) from “Ant-Man” return for “Ant-Man and the Wasp”?

He (or she) does indeed! And the critter who became Cassie’s cereal-chomping pet comes in very handy.

When Scott Lang (Paul Rudd) needs to break house arrest, the ant is able to take his place: The authorities monitoring Scott’s ankle bracelet don’t realize it’s on an ant, so all seems well.  He can even play the drums!

Scott also makes some new ant friends. Unlike Hank Pym (Michael Douglas), who identifies the insects by number, Scott likes to give them punny names. His main ride in the first film was Ant-thony, who was sadly killed by villain Darren Cross (Corey Stoll.)

In “Ant-Man and the Wasp,” we (briefly) meet an ant named Ant-tonio Banderas. (If you want to read more about the various types of ants in both films — including carpenter ants, bullet ants, crazy ants and fire ants —  enjoy this detailed, scientific analysis.)

And happily, no more sheep are sacrificed in the name of science, as in the first “Ant-Man.”

Scott, however, does, however object to some hungry, hungry seagulls.

Sadly, as The Wasp, Evangeline Lilly does not get to control an army of wasps. She still retains her ant-communication magic, however.

Here’s my non-spoiler review of the film for Forces of Geek.