Fortinbras the dog isn’t in many scenes of “A Wrinkle in Time,” but he’s an important member of the Murry family.  Here’s what we know about the loyal family dog, often called “Fort.” 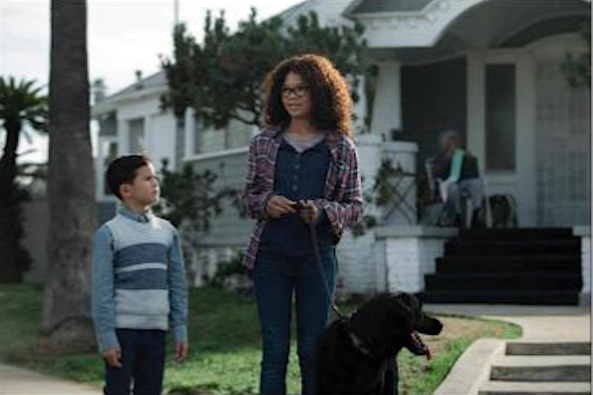 Photo: Disney/”The World of A Wrinkle in Time: The Making of the Movie“

2. Coda could be “hard-headed” and “cranky.” As Reid explained to Collider, “He’s so sweet. He’s so nice. He can be a little cranky, though. He likes his treats and he likes his owner a lot. They have a really good connection, which is good, but he’s a little hard-headed sometimes. He’s cute.” Reid has three dogs of her own: Bella, a pit bull; Prime, a boxer; and Cayenne, a red toy poodle.

3. Fortinbras was named after the prince who enters at the end of “Hamlet.” Author Madeleine L’Engle told Scholastic, “Many of my characters are named after people in plays.”

4. In the book, Fort came to the Murrys as a stray. As L’Engle wrote: “Fortinbras had arrived on their doorstep, a half-grown puppy, scrawny and abandoned, one winter night. He was, Meg’s father had decided, part Llewellyn setter and part greyhound, and he had a slender dark beauty that was all his own.”

5. Fortinbras is an excellent guard dog and “never barked without reason.” In the first chapter of the book, his bark alerts Meg that someone (who ends up being Mrs. Whatsit) is outside. He also growls at Calvin when he first meets him, but does not bark at Mrs. Who.

6. While Meg, Charles Wallace and Calvin travel the universe, Fort stays safely at home, so he’s never in any danger in the film.  SPOILER: Sadly, the dog passes away in the third book in the series, “A Swiftly Tilting Planet.” Meg (who is now married to Calvin) gets a new dog named Ananda.