Jordan Peele’s new movie opens up with a shot of rabbits — and even more rabbits — in cages. What exactly the bunnies symbolize is one of the many aspects of the film that people have enjoyed analyzing.

Here’s everything we know about the bunnies, including that Peele isn’t exactly a fan. 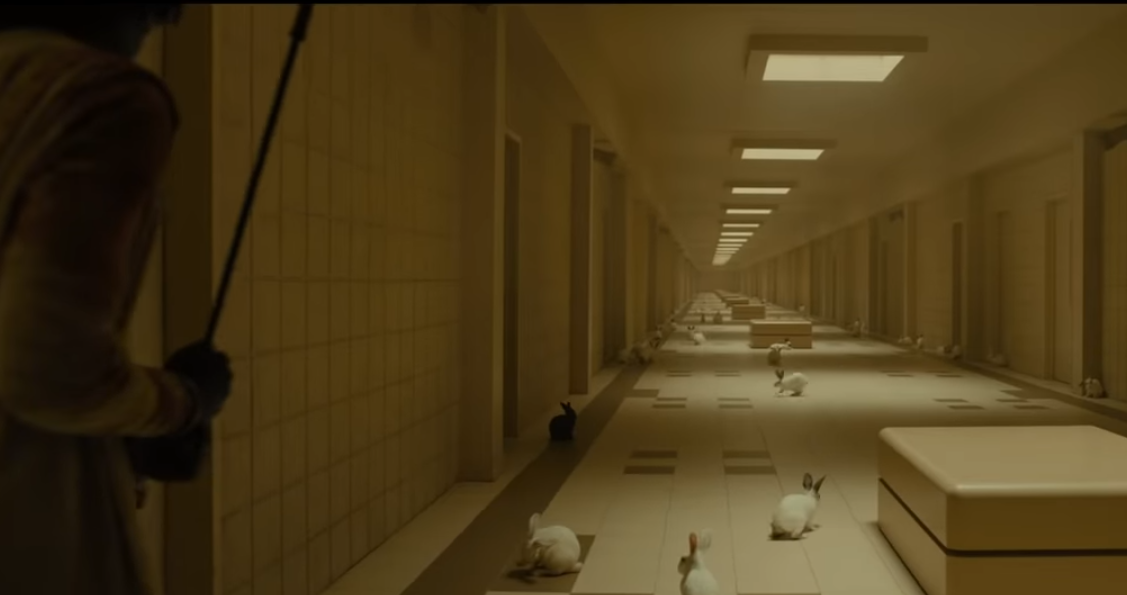 1. The bunnies were real
Ian Cooper, the creative director for Jordan Peele’s Monkeypaw Productions, told Vanity Fair there were between 105 and 110 rabbits on set. Which involved a lot of wrangling, a lot of bunny poop, and some surreal happy accidents while filming.

Near the end of the film, as seen in the trailer, an armed Adelaide (Lupita Nyong’o) runs through a corridor filled with bunnies. “There’s stuff that made it onto film that is so funny and incidental. I think right when she comes around the corner, the first time in the underpass, and she’s walking to them, [they] get freaked out and scamper right in front of her, and we were all applauding off camera, like yes, thank you,” said Cooper. “They were so great and so funny and surreal. They really make that scene.”

2. But they weren’t always cooperative
“It was insanity,” Cooper said of corralling over 100 bunnies. “They were extremely well-behaved, as much as a creature with that level of I.Q. can behave, you know? Our animal wranglers were incredible, so patient with them.”

Filming the opening scene didn’t go as planned. When they went to do a close-up of the main rabbit, it fell asleep! “We were like, ‘Oh my God, all of a sudden we have 105 not-trained actors,” said Cooper. “The rabbit was just falling asleep and we were like, ‘No, keep your eyes open!'”

3. CGI bunnies were used in some scenes
According to Cooper, in scenes where Nyong’o was running, the rabbits were replaced with fake rabbits as stand-ins, then added back in post-production by Industrial Light and Magic.

4. Peele is terrified of rabbits!
As he told The Guardian, “They’re an animal of duality. They’re adorable but they terrify me at the same time. And they got those scissor-like ears that creep me out.” Thus incorporating both the theme of the film’s main characters facing off with their murderous doppelgangers — and those ever-present scissors — in one fluffy package.

He also told Rotten Tomatoes, “Rabbits [are] supposed to be cute. On paper they’re adorable, lovable rabbits. Have you ever gotten close to a rabbit? You can tell in their eyes that they have a sociopath. If you put a rabbit brain in a human body, you have Michael Myers. They have no empathy.”

4. Even more rabbits…
“I wanted to make a movie full of Easter eggs,” Peele said, which means rabbits are everywhere, just like “Jeremiah 11:11.”

Observant viewers have noticed that Zora (Shahadi Wright Joseph) is wearing a rabbit design on her T-shirt when the family first arrives at their vacation home. And the word on the sweatshirt she wears for much of the film says “Thỏ,” which is Vietnamese for “rabbit.” There’s also a stuffed bunny that Adelaide remembers from her childhood, and that Red (her scissor-wielding twin) isn’t so affectionate towards.

6. No actual bunnies were harmed….
At least on set. In the film, however, we find out that (SPOILER) the people who live underground (the “Tethered”) have only bunnies to eat… raw! We catch a very brief glimpse of two people feeding each other what appears to be raw meat.

7. What do the bunnies symbolize?
Besides being equated with science experiments and cloning, the rabbits are also being interpreted as a metaphor for racial or economic inequality in America. As Cooper told Vanity Fair, “That was [a] huge conversation… I think Jordan discusses this a lot: he much prefers people to be able to think, and talk, and discuss, and unpack that than to be definitive.” So it’s up for debate.

The decision to have the bunnies not all be the same color was a deliberate choice, by the way. As Cooper told Vanity Fair, “If they were all white rabbits with red eyes, it would feel almost too cartoon, like it’s a lab, or it’s an Alice in Wonderland thing, right? I think the realness of having a variety of rabbits just made it more creepy, and more seeming like something insidious was going on down there.”