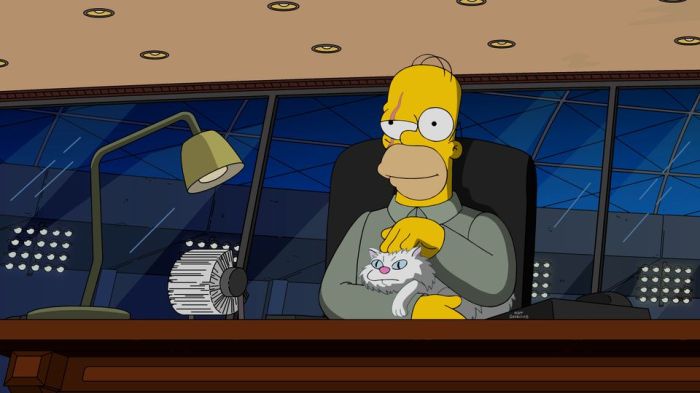 “The Simpsons” aired its 600th episode Sunday, October 16, ending with a segment sending up James Bond, with bartender Moe as a spy named “Moefinger,” Bart as a young recruit and the supposedly dead agent Homer revived as the villainous Blofeld. His big reveal: He was stroking his customary white cat, a sure sign of evil in any film!

The closing bit for the episode, which was also a “Treehouse of Horror” Halloween ep, parodied the legendary animated Bond credit sequences with an underwater extravaganza featuring Patty and Selma in bikinis, Sideshow Bob, multiple Moes hatching from pickled eggs, and The Cat Lady swimming with her many, many cats.

And a surprising amount of cats died in this episode. Lisa’s cat Snowball sacrificed himself to save Marge from Lisa’s murderous imaginary friend (Sarah Silverman), taking a knife for Marge, who was unaware of his sacrifice. RIP Snowball. Again!

The Cat Lady and several of her tabbies were also slain in a free-for-all in the Bond segment. 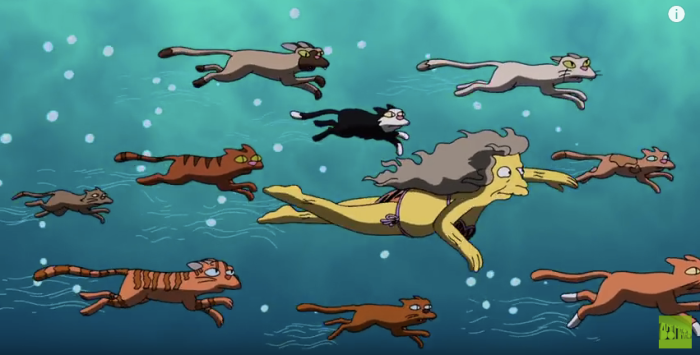