In the first “Blade Runner,” which is set in 2019, animals are incredibly rare, if not extinct. And only the rich can afford artificial animals, as we see when Rick Deckard (Harrison Ford) meets Rachael (Sean Young) at the Tyrell Corporation. He asks her if her owl is artificial and she says, “Of course it is.”

The owl was originally supposed to be real, according to Paul M. Sammon’s book “Future Noir: The Making of Blade Runner.” The original screenplay had Rachel answering “Of course it is,” but the line was later changed to”Of course not.”

“Sean’s line was relooped in post-production from ‘Of course not’ to ‘Of course it is,'” explains [producer] Michael Deeley, “because, first, the owl’s eyes glow in a later scene. And only replicants have glowing eyes. Secondly, Sean’s line was changed in order to add credibility to the idea that Tyrell could manufacture perfect imitations of living things — remember, that owl’s the first animal you see in the film. So we changed Rachel’s dialogue to support these things.”

That means that when we see Zhora (Joanna Cassidy) and her snake, the snake is also artificial. As she tells Deckard, “You think I’d be working in a place like this if I could afford a real snake?” The snake, incidentally, was her own pet python, named Darling. 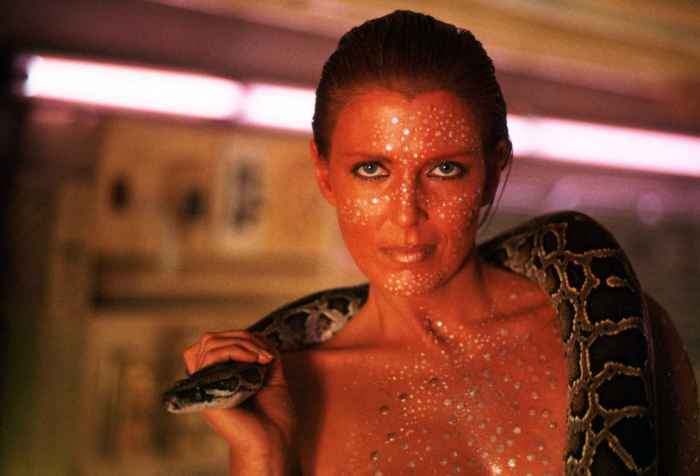 As she told Sammon:

“One of the aspects of the character that most fascinated me was Zhora’s snake. because I myself kept snakes at one time; in fact, I had more than six of them. I used to roller skate down Venice boardwalk with one on  my shoulders…. [Darling] was a male Burmese python, four years old at the time. We had a little trouble with him because all that smoke they used in the dressing room set was bothering him. Darling was getting uncomfortable and very annoyed.”

The unicorn is a recurring motif in the film: First, we see it as a silver origami figure made by Goff (Edward James Olmos). In the director’s cut, Ridley Scott inserted a shot of Deckard dreaming about a unicorn. Scott has confirmed that this is a nod to Deckard’s being a replicant. Just as Deckard knows Rachel’s childhood memory about a spider, Goff knows that Deckard dreams of unicorns. Apparently, you can implant dreams the same way you can implant memories.

In “Blade Runner 2049” (spoilers if you haven’t seen the movie yet): Agent K. (Ryan Gosling)’s fascination with a horse statue might be another nod to the unicorn of the first film. And it sets up another mystery: Is his memory of having it as a child real or an implant? (Replicants don’t have childhoods, of course.)

There are no real or artificial animals in the film… until Agent K. tracks down Rick Deckard. He’s surprised to find him with a dog (an older, slow-moving mix). When K. gets around to asking about whether the dog is real or not, Deckard answers, “Why don’t you ask him?”

We never do learn the answer, although it’s likely just as artificial as the owl. And if Deckard is an aging replicant, than artificial animals can age too. Deckard is abducted and (sadly) we don’t see the dog again. You can see the dog briefly in this still taken from one of the trailers.

I’d like to think the dog is alive and well — and doesn’t have an expiration date.

You can read my non-spoiler review of BLADE RUNNER 2049 at Forces of Geek.