The directors of “Winged Migration” (2001) and “Oceans” (2009) return with their gorgeous new nature documentary “Seasons,” which features some of the most stunning footage of wild animals ever captured. In a time when most wild animal footage seems to be CGI, it’s a joy to watch real animals in the wild.

The narrative is the story of the natural world and how it’s changed since the encroachment of men. We see how the dense forests of Europe gave way to fields for crops and the cities of men.

The film begins with snowy scenes of musk oxen, deer and owls weathering a brutal winter in a nod to the Ice Age. Slowly, the thaw begins and we are treated to scenes such as the birth of a gangly baby deer, birds feeding their hungry nestlings, baby bears wrestling their siblings, and young wood ducks gathering the courage to take their first leap from their high nests.

The production, which took 18 months, involved 10 camera operators and 500 hours of
rushes. The coverage is fantastic, with astounding close-ups of the animal world. We see a family of dormice scurry into their home inside a tree — and then we see inside their treehouse as they slumber away in a big, cozy dormouse pile. We also see both sides of a lynx’s futile attempt to reach fox cubs inside their lair under a fallen tree.

The narration (which is in French) is minimal: You won’t learn anything about the mating habits of bears or what boars like to eat. And you have to figure out for yourself whether that’s a lynx or a bobcat or if you’re watching a dormouse or a chinchilla. 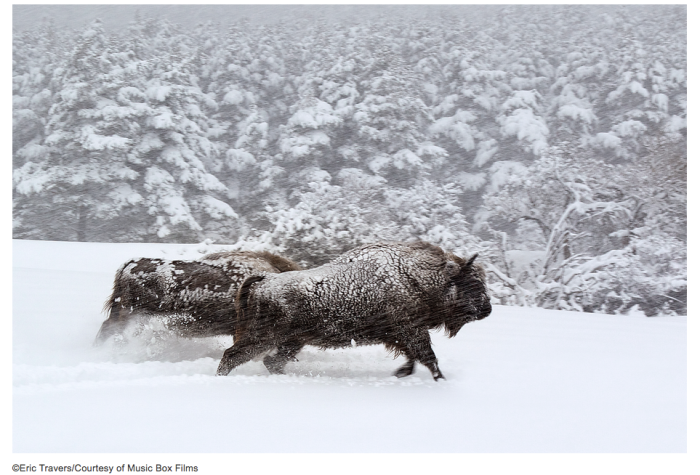 You will get caught up in the beautiful cinematography with scenes such as steam rising off a herd of snow-covered bison. And there is drama in scenes in which a pack of wolves corner a lone horse, which manages to defend itself with its sharp hooves and rejoin its herd.

After glorying in the variety of animal life in the deep woods, the film eventually transitions to the encroachment of humans, fields and paved roads. The narrator sadly intones, “The golden age of the forest is over… a whole world disappears.” The filmmakers managed to find locations of old growth forest in Poland and France to convey a world that’s been slowly lost through most of the world.

The film closes with a view of modern Paris and the narrator tells us: “10,000 years ago, this was an expanse of forest, inhabited by wild animals. If we are capable of building eternal cities, we should be able to preserve the nature in our world. What consideration do we have for our fellow creatures of the planet? Threatened and attacked from every angle, nature has not yet given up. It’s not too late. It’s resisting…”

In the final scene, we see a woman marveling at a deer and its fawn in the forest. The film ends with this hopeful message:  “At the dawn of this new century, an alliance between man and nature is still possible.”

Since this is a nature documentary, there are scenes of predators stalking their prey. Some of the animals are killed, others manage to escape and at least one scene isn’t as deadly as it appears while watching the film:

Check the official site to see where the movie is playing near you.