Sadly, Nellie passed away recently. She’s the first dog to posthumously win the award that previously went to such doggie stars as Uggie from “The Artist” and the entire canine cast of “White God.”

“Nellie, may she rest in peace,” “Paterson” star Adam Driver told The Hollywood Reporter.  Producer Carter Logan accepted the prize, which is a golden collar.  “She was an incredible performer. We looked at a lot of tape and when we saw her, we knew she was the one. She had a unique voice and was able to express herself,” he said

Logan also urged people to rescue more dogs like Nellie.  “Please adopt. Don’t buy a dog or go to a breeder as a tribute to Nellie.”

The Telegraph describes Marvin as “an eccentric British bulldog who stares and schemes at home from his trusty armchair” who’s “left grumbling on the pavement” when his owner goes to the local bar for a beer.

Other dogs that received runner-up awards at the French film fest: 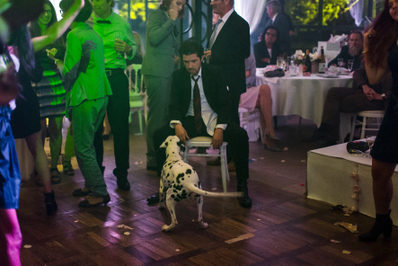 Jacques, the Dalmatian star of the French drama “In Bed With Victoria,” was awarded the jury prize.

British director Ken Loach was recognized for regularly using three-legged dogs in his movies, including Shae, who stars in his new film “I, Daniel Blake.”  He received the Palm Dogmanitarian award.

The award for cinematic canines has been handed out since 2001.