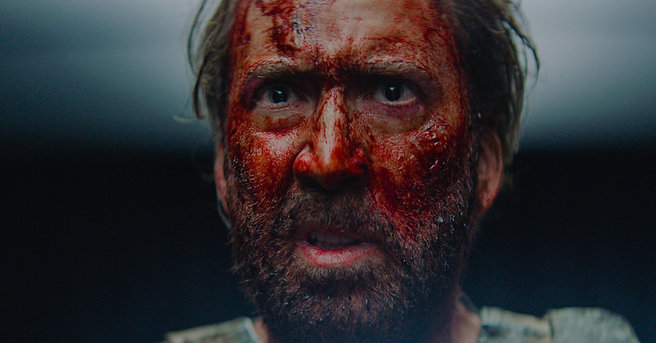 Nicolas Cage’s new movie “Mandy” is a wild, hallucinatory bloodbath with some unexpected animal cameos. People are killed left and right, but are any animals hurt during this revenge movie?

[SPOILERS] The film was monitored by the American Humane Society and bears their “No Animals Were Harmed” mark of approval. As seen in the trailer, a tiger makes a brief appearance at a drug lab. “Lizzie” is let out of her cage, but does not attack. As she walks away, she morphs into a saber-tooth tiger. Lizzie was played by a tiger named Corfu.

We also briefly meet “Dog the dog,” who belongs to Bill Duke’s character Caruthers. Dog (played by Madd’yz Dog Lollyta, according to the credits), appears to be a Mastiff puppy. But while no harm comes to the dog or the tiger (or a lizard who also makes a quick cameo), there is disturbing animal content In one dreamlike scene, Mandy (Andrea Riseborough) walks through the forest near her house and comes across a dead fawn. She’s moved to tears as she gazes at it. The camera lingers on the poor creature’s partially decomposed face. In an even more upsetting scene, Mandy tells Red (Cage) a troubling incident from her childhood in which her father urged the neighborhood children to kill a nest full of baby starlings. Mandy tells Red when it was her turn to swing a crowbar and kill one, she turned and ran instead. You can read my “Mandy” review at Forces of Geek.