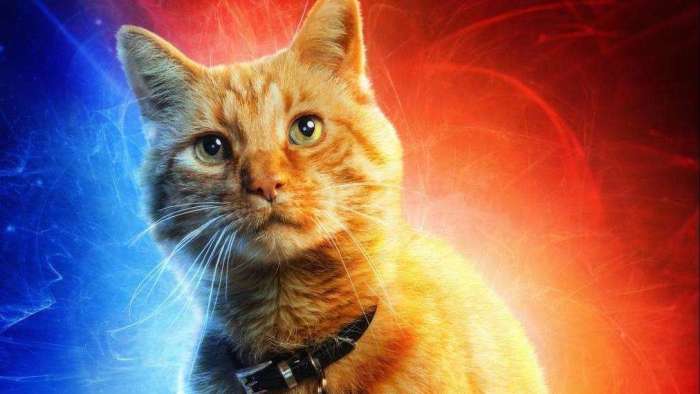 Sure, we love Captain Marvel (Brie Larson), but her cat Goose is the real star of the movie.

Here’s what you need to know about Goose:

1. The cat got a name change from the comics
In the comics, the cat’s name is Chewie, but was changed to pay homage to the “Top Gun” character played by Anthony Edwards. (Don’t worry: This Goose survives just fine!)

2. The cat isn’t really a cat
Goose is really a flerken, an alien with impressive tentacles who can eat just about anything. Which comes in very handy in certain scenes.

3. Goose was played by 4 different cats
Reggie, Rizzo, Gonzo, and Archie all took turns playing Goose (who is definitely a girl in the film, the filmmakers say). Reggie was used for most of the close-ups and reaction shots. He was also the model for the prop and CG cats, according to Mashable. Samuel L. Jackson explained the secret of their relationship at the press conference: “He’s snack-oriented. He shows off. You give him something to eat, you talk softly and nice to him, give him something to eat again.”

4. Reggie was the biggest star on set. And a total pro.

Co-director Anna Boden told IGN, they was nervous about working with a cat. “We talked to a lot of cat trainers and they said, ‘It’s not really like training a dog. You can maybe suggest that the cat do something.’ But anyone who has a cat knows they don’t exactly come when beckoned to… We thought it was going to be a total nightmare, but then we met Reggie….” She kidded that Reggie was “much better behaved than some of our actors.”

5. Brie Larson is actually severely allergic to cats
As the actress explains in her Wired Autocomplete Interview, she became a dog person because she can’t be around cats. (She has two dogs.) She joked to IGN that Reggie didn’t take her being allergic to him personally.

“I wish that it wasn’t the case!,” Larson told USA Today. “Cats are probably super-cool. I’ve just developed a sort of ‘you stay over there, I’ll be over here’ relationship, because it makes me break out in hives.”

In scenes where Carol and Goose shared a scene, but didn’t touch, they used a stuffed cat. But when she did have to pet or interact with Goose, “We’d have somebody there to wipe her hands afterward and to make sure that the cat wasn’t hanging around on set when it didn’t need to be,” Boden told USA Today.

6. McKenna Grace is also allergic to cats
Although we don’t see young Carol Danvers with Goose (or any other cats), Grace, shares the same unfortunate allergy with Larson. She was allergic to her orange kitty costar, Fred, in “Gifted.”

7. Although Nick Fury loves Goose, Sam Jackson isn’t really a cat fan
“No, I am not a cat person,” Jackson said during the film’s press conference. “But I’m also not a dog, bird or a fish person, either. I just don’t engage pets.” Costar Lashana Lynch (who plays Air Fore pilot Maria) admitted to IGN she doesn’t like cats either… and is also allergic!

8. Goose’s role got pumped up
Captain Marvel’s cat was always going to be in the film, but it was Marvel honcho Kevin Feige who decided we needed a lot more Goose.

“We wrote the first draft and we showed it to Marvel and Kevin Feige, and he said, ‘Mm-hm, mm-hm, yep. This is going to need at least 200% more of this cat in this movie,'” Fleck told Mashable. “He was right. He just felt like this is something that the audience is going to respond to, and here we are, responding to Goose in a big way.”

9. Reggie and Sam Jackson costarred in a movie before this.
Reggie and Archie were both in Quentin Tarantino’s “The Hateful Eight,” as was Sam Jackson. As noted by Cinema Cats, the orange tabby is seen in flashbacks at Minnie’s Haberdashery before the bullets start flying and presumably escapes all the mayhem.

10. Goose (or Reggie) attended the Hollywood premiere
Marvel filmed the cat getting dressed for the big occasion and choosing his favorite Marvel superhero: (Spoiler: It’s Captain Marvel.) And yes, he made it to the red carpet as well!

11. Goose has her own scene after the credits
Don’t go anywhere: Goose is the star of the second post-credits scene in the movie.