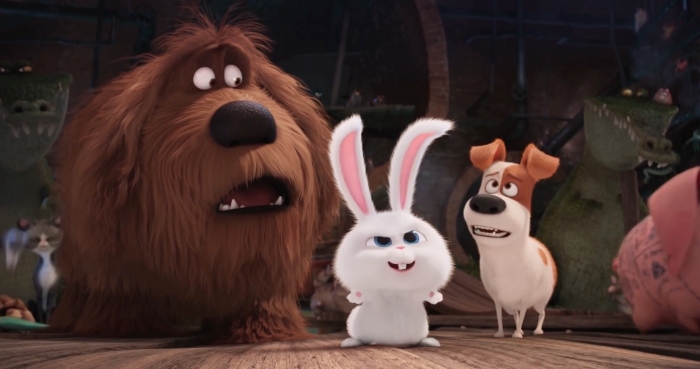 The ads for “The Secret Life of Pets” makes it look like a fun, fluffy adventure about some mild mischief that New York City pets get into while their owners are away. And it is… at first. If you’ve seen the trailer, you’ve seen Chloe the cat raid the fridge and Leonard the Poodle rock out to heavy metal while good dog Max (voiced by Louis C.K.) waits patiently at the door for his beloved human, Katie.

That’s how the film starts: Max recounts how perfect his life is with Katie but then one horrible day, she brings home (gasp!) a new dog, Duke (voiced by Eric Stonestreet). This is a terrible shock to any dog, of course, especially when he’s a big, hairy galoot who takes over your bed and eats your food. The dogs’ escalating rivalry leads to both of them ending up lost and collarless in the big city and — even worse — in the clutches of the dog catchers!

That’s when things take a strange, strange turn that’s as left-of-field as when Bruce Willis ended up in the basement of that pawn shop in “Pulp Fiction.” Things still stay PG, but when the movie (and our heroes) get hijacked by a human-hating bunny named Snowball (Kevin Hart), you realize this movie is really not for kids at all. And you realize that Illumination (the studio behind “Despicable Me” and the Minions) is more about random weirdness than heartwarming life lessons. (Yes, that’s a tattooed pig and a gator or two in the pic above.)

Some of the perilous situations the dogs find themselves in are reminiscent of “Finding Dory,” which only underscores that this movie is more intent on whiz-bang set pieces than character and storytelling. Yes, it’s fun, but it’s definitely not the movie you were led to expect from the ads.

And the B-story of Max’s Pomeranian neighbor Gidget (Jenny Slate, probably my favorite character) leading a crew that includes Buddy the Dachshund and Mel the Pug in a citywide quest to find Max reminds you that it was done better in “Toy Story 2.” There is some great voicework by Slate, who unveils hidden depths when her dear Max goes missing, as well as Dany Carvey as grumpy wheelie-dog Pops and Albert Brooks as a menacing falcon named Tiberius.

There are definitely laughs to be had along the way and the film ends on a cheery note with the pets happily greeting their humans who have no idea what kind of wild adventures they’ve had. And, because of their epic journey, Max and Duke are now BFFs.

So you will probably walk out of the theater with a smile on your face, eager to be greeted by your own Max or Duke or Chloe. And you’ll want to get that cute stuffed toy that most resembles your beloved pet. But you’ll also be more likely to recommend “Zootopia” or “Finding Dory” to your friends.

Buy or rent on Amazon

One thought on “Review: ‘The Secret Life of Pets’”