Today would have been Robert Mitchum’s 100th Birthday! The star of “The Night of the Hunter,” “Cape Fear,” and ‘The Longest Day” often played villains, but he also showed his softer side in many films with animals and children.

Always a horse lover (he got his start in a Hopalong Cassidy western), Mitchum raised quarter horses on his ranch in Maryland, before moving the whole outfit to Santa Barbara, California.

Here’s a guide to some of the best animal moments in his films: 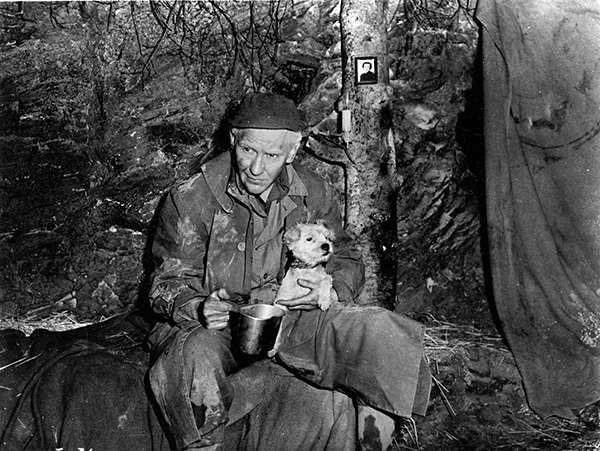 “The Story of G.I. Joe” (1945)
Mitchum received his only Oscar nomination as Lt. Bill Walker, who leads his troops into battle in Italy. In his first line of dialogue, he orders his men to give up the puppy they’ve adopted. When it whines in complaint, he relents. The men keep the dog as their mascot and name her Squirt.  (The good news: The dog survives. The bad news: Mitchum doesn’t.)  Note: This poster doesn’t accurately depict the dog, which is more of a terrier than a cocker spaniel. The photo of Burgess Meredith holding her is how she appears in the film .

In this noirish thriller, Mitchum plays the mysteriously absent brother of wealthy businessman Robert Taylor. When he finally shows up, we learn that it wasn’t Mitchum who traumatized their horse until it can’t be ridden, it was Taylor, who’s been hiding a murderous dark side. The horse is happy to greet Mitchum, as is the family dog. Meanwhile, bride Katharine Hepburn should have suspected something when her dog took an immediate disliking to Taylor the first time they met.

“The Red Pony” (1949)
Mitchum’s stable hand character was created just for the film adaptation of the heartbreaking John Steinbeck story. He plays Billy Buck, who helps a boy raise his pony, then tries and fails to save the beloved horse.

“Holiday Affair” (1949)
Mitchum romances widow Janet Leigh in this charming romantic comedy set in New York City: He’s fond of taking his lunch in the park so he can “eat with the seals” and likes to feed a squirrel. As he later tells a judge after a legal misunderstanding: “He’s an orphan. He depends on me.” 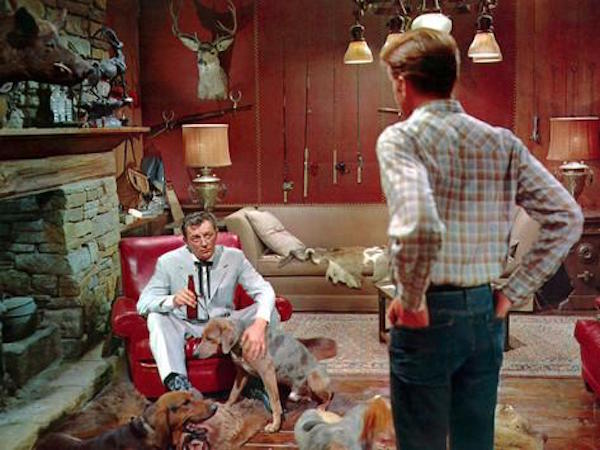 “Home from the Hill” (1960)
Mitchum plays a stern Southern patriarch in this drama: While we’ve see many films where hunting dogs are banished from the home (such as “The Fox and the Hound”),  his character likes to relax with his hounds in front of the hearth. With a beer, of course!

“Mr. Moses” (1965)
In this rarely seen adventure movie filmed in Kenya, Mitchum is an injured con man who becomes a kind of Moses figure to a local village. He helps them relocate before a new dam wipes their village off the map. And he does so while riding an Indian elephant named Emily!

Want to know more about Robert Mitchum? Visit “Welcome to the Big Sleep,”an in-depth site dedicated to the late actor.