In director Hafsteinn Gunnar Sigurdsson’s dark Icelandic comedy “Under The Tree,” neighbors feuding over a tree that borders both yards escalates to extremes. The hostility, unfortunately, extends to the family pets.

As the LA Times puts it: “A blacker than black comedy that is so savage you often don’t know whether to shudder or laugh. It is also a reminder … that Icelanders have the bleakest of all the bleak Scandinavian senses of humor.”

EW‘s review: “As the strained disagreement over the tree blooms into open hostility, a sort of tactical War of the Roses begins, with escalating misdeeds on both sides. Some are petty; others wildly, outrageously criminal. (If you donate to PETA regularly, look away.)”

THR sums it up: “Inga and Baldvin have a cat; Konrad and Eybjorg have a dog. When the cat goes missing, the dog soon follows in one of the film’s wildest, cruelest and most unforgettable gags.”

The fact that the dog and cat disappear is in the trailer.

But what exactly happens to the dog? [SPOILER] 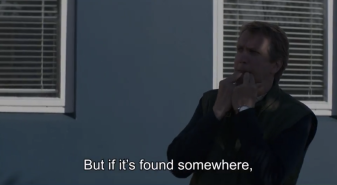 The “wildest, cruelest and most unforgettable gag” that THR refers to: In a truly depraved turn, the German Shepherd is killed, stuffed and left on the doorstep of its owners!

As one IMDb reviewer noted, the film was so divisive, it nearly brought two different audience members to blows when it was screened at a film festival:

Some folks saw the film as an ultra-dark comedy (perhaps like “War of the Roses”) others saw it as a drama or cautionary tale. As for me, I just felt it was too dark to be laughed at and overall I found that it was well made, but miserable to watch…. The acting was good and the film watchable, but incredibly nasty and unpleasant.

By the way, something extraordinary happened during this viewing at the Philadelphia Film Festival. One man in the audience was laughing uproariously throughout the film. His response was extreme and unusual to say the least. Well, it apparently really offended another guy in the theater and through the course of the film they began screaming at each other. At the finale, it got uglier and I rushed to get Film Society staff because it looked as if they’d come to blows!! So, obviously one guy thought this was a great dark comedy and one thought it was a drama and it was offensive for anyone to laugh at the hellish story. Amazing that neither apparently saw that they were acting out the picture!!

Despite its divisiveness, the film has won a number of awards, including a Fantastic Fest Jury prize for Best Director, Comedy Feature; and the Hampton Film Fest’s Golden Starfish Award. It also swept Iceland’s Edda Awards.

Its current critics’ rating on Rotten Tomatoes is 86%: Viewers have given it a much lower 66% rating.