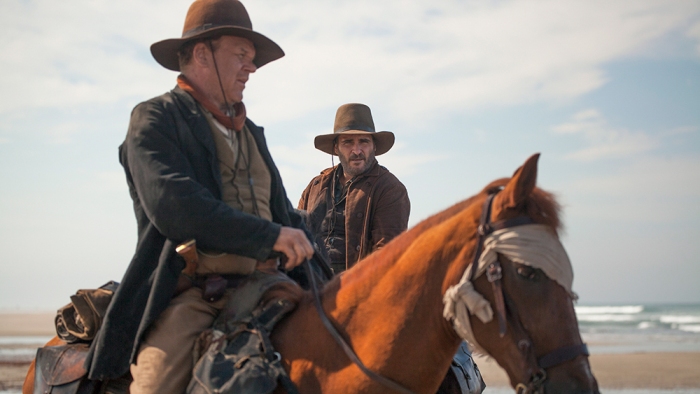 In the R-rated western “The Sisters Brothers,” based on the novel by Patrick DeWitt, a lot of men are gunned down and the animals don’t fare much better.

[Related: John C. Reilly Cried When He Said Goodbye to His Horse in ‘The Sisters Brothers’]

The movie begins with a barn in flames and a horse running, fully on fire. (We assume that horse, and all the others who didn’t make it out of the barn, don’t survive.)

LeAnn Suchy writes in her blog, “I can’t even tell you how much I loved Eli (played by John C. Reilly)’s horse Tub and what he goes through. I may have had a tear in my eye over a damn horse.”

Tub is not in great shape to begin with. In the novel, he’s described as a “portly and low-backed” and unable to travel “more than fifty miles.” Eli is so kind to animals and his aging horse his brother Charlie (played by Joaquin Phoenix) calls him “The Protector of Moronic Beasts.”

One night, Tub is mauled by a grizzly, but survives. Eli, who’s been bitten by a spider and is delirious, awakens to find a dead bear at the campsite and his wounded horse. Tub ends up losing an eye (graphically described in the novel), but not depicted in detail in the film.

Tub survives for much of their journey, but one morning Eli finds him at the bottom of the cliff, dead.

One thought on “‘The Sisters Brothers’ Viewer Advisory”