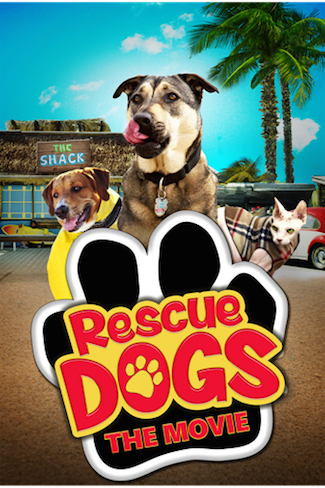 The family movie “Rescue Dogs,” which opens this weekend, not only stars real rescue animals, but theaters showing the movie will also be hosting live adoption events where you can bring home your own rescued pup or kitten.

More than 20 rescues from New York to Seattle are helping out, including:

Among the groups partnering with the film is Second Chance Rescue of New York City. “We here at Second Chance Rescue NYC are so excited to be a part of ‘Rescue Dogs!,” the organization said in a statement. “The plight of homeless animals in America is daunting. We are so thrilled that ‘Rescue Dogs’ will bring such great awareness to this important cause.”

The movie stars rescue dog Baron (star and producer Courtney Daniels’ own dog) as Charger, who helps his human Tracy (Paul Haapaniemi) fight off developers who want to close down the beach restaurant that’s been in Tracy’s family for years. His voice is provided by Peter Oldring of “Bojack Horseman” and “My Friend Rabbit.”

Callie, a real-life rescue dog who was born without a tail, plays herself, as does Hambone, the stray dwarf hamster who was rescued from West Los Angeles Shelter’s “pocket pet” room.

Find where the film is screening near you on the Rescue Dogs site or sign up to host your own screening.