Wes Anderson’s “Isle of Dogs” is a funny, charming treat for dog lovers and an ode to man’s best friend. (Sorry, cat lovers!)

Scroll down for spoilers about the few dark moments in the film.

It’s (somewhat arbitrarily) set in the fictional Japanese city of Megasaki, 20 years from now, but the aesthetic is — no surprise to Anderson fans — fully retro.

Told in several chapters (and some flashbacks), the story follows 12-year-old Atari Kobayashi (Koyu Rankin), who pilots a ship to the nearby Trash Island, where all the dogs of the city have been exiled. Atari is desperately searching for his dog Spots, the first dog sent to the island, per the decree of his corrupt uncle, who happens to be mayor. It’s all part of a centuries-old war between cat fanciers and dog lovers, with the cat fanciers currently holding sway.

Atari meets four dogs who help him in his quest: Rex (Edward Norton), King (Bob Balaban), Boss (Bill Murray), and Duke (Jeff Goldbum). Their pack leader, Chief (Bryan Cranston) has always been a stray and has no interest in helping the “Little Pilot,” but his pack outvotes him.

They’re aided along the way by other exiled dogs and pursued relentlessly by the Mayor’s forces, since his entire career is dependent on his dog-hating platform.

Despite settings including Trash Island and various abandoned facilities (instead of, say, a gorgeous hotel in Budapest), Anderson’s visual sense is as rich and eccentric as ever. One of the film’s best conceits is that every time there’s a dog scuffle, we see a cartoonish cloud of limbs and teeth.

As we learn from the opening sequence, “the dog’s barks have been translated into English,” while Atari speaks Japanese. In a way, it’s a handy device to show the communication barrier between humans and dogs (and lets Anderson use his regular stable of actors). But what Atari says is never subtitled. And while everyone else in Megasaki speaks Japanese, there’s an official translator (Frances McDormand) who translates everything into English. So why set it in Japan at all?

Dog lovers and Anderson fans should enjoy “Isle of Dogs,” which, like his other films, is a wry meditation on life, loyalty and family. Just, this time, with dogs.

Since Wes Anderson films often include the almost casual death of dogs or cats, were any animal characters harmed in the film? (SPOILERS) 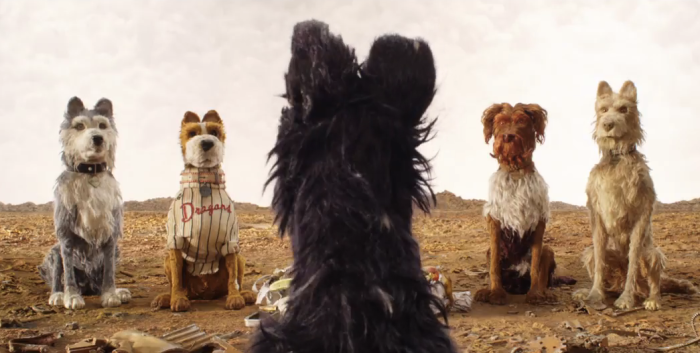 Chief tears off a rival dog’s ear as two packs fight over a package of garbage.

Atari and his canine pack encounter a colony of “cannibal” dogs who admit they’ve eaten their fallen leader. All of them suffered from medical experiments that were conducted on them before the island was abandoned by humans. Many still bear the scars of their mistreatment. (Several bandaged dogs are show in the film’s official poster.)

We also learn that a dog died after the door of his kennel failed to open on reaching Trash Island.